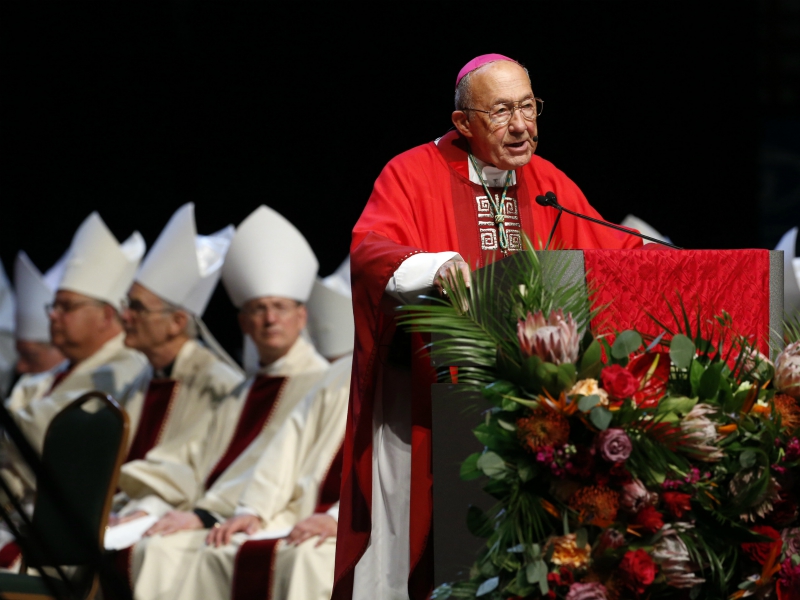 The Rev. Eusebius Beltran, archbishop emeritus of Oklahoma City, reads a biography of the Rev. Stanley Francis Rother at the beatification ceremony of the martyred priest in Oklahoma City on Sept. 23, 2017. Image courtesy of the Archdiocese of Oklahoma City September 23, 2017 By Bobby Ross Jr. ShareTweetShare

OKLAHOMA CITY (RNS) — In the final step before sainthood, a missionary from Oklahoma slain during Guatemala’s civil war has been beatified — the first U.S.-born priest and martyr to receive such recognition by the Catholic Church.

An estimated 20,000 Catholics waited in long lines to attend the special Mass on Saturday (Sept. 23) celebrating the Rev. Stanley Francis Rother, who was shot to death by three masked assassins who entered his rectory in 1981.

“In a period of grave social and political turbulence in Guatemala, Father Rother lived as a perfect disciple of Christ, doing good and spreading peace and reconciliation among the people,” said Cardinal Angelo Amato, who heads the Vatican’s Congregation for the Causes of Saints and gave the beatification homily.

“His martyrdom, if it fills us with sadness, also gives us the joy of admiring the kindness, generosity and courage of a great man of faith,” Amato told the crowd that filled the Cox Convention Center arena and several overflow rooms.

Declared by Pope Francis, Rother’s beatification means that the priest — who was 46 years old when he died — lived a holy life, is now in heaven and may be publicly venerated.

At Saturday’s ceremony, the church declared that the slain priest lives in heaven and intercedes with God on behalf of people on Earth. As a result of the beatification, Catholics now will refer to him as “Blessed Stanley Rother.”

In an apostolic letter read in Latin by Amato and English by Oklahoma City Archbishop Paul S. Coakley, Francis praised Rother as a priest and martyr “who was driven by a deeply rooted faith and a profound union with God, and by the arduous duty to spread the Word of God in missionary lands.”

For Rother to become a saint, a miracle involving his intercession must be verified, Coakley said.

“We are beginning to get some reports,” Coakley told reporters. “I’ve interviewed at least one individual who has experienced what they think might be a miracle. So we’ll take it from there. But it’s a very rigorous process. It’s normally a healing of some sort — of a medical condition that medical science can’t explain.”

Elmy Pablo was among the thousands who came to remember the sacrifice Rother made to serve Mayan descendants in Santiago Atitlán, Guatemala — a poor, mountain village 50 miles west of Guatemala City.

Pablo, whose grandfather knew Rother, joined a contingent of about 15 parishioners from that Guatemalan church.

“In Santiago, we are so thankful, and we are so happy, that three days ago we started parades with his picture,” she said. “There’s a lot of music, a lot of activities. We are just so happy.”

Oklahoma Catholics seemed equally excited. Thousands more showed up than could fit in the arena, which has a seating capacity of 14,000.

“We figured it was a historical event to have an Oklahoma saint making his way through sainthood, and we wanted to bring the kids and have them experience that,” said Jesse Fyler, whose family attends the Church of the Madelene in Tulsa.

After waiting in line for nearly an hour, the Fylers were directed to an upstairs ballroom to watch the ceremony on live video.

Jesse and Theresa Fyler drove two hours with their three children to celebrate the beatification of the Rev. Stanley Francis Rother in Oklahoma City. RNS photo by Bobby Ross Jr.

“We’d love to be inside seeing it. But we’re also excited that there’s such a great turnout that they need this many seats. … I assume we can receive Communion in here.”

She was right about that.

The beatification of Rother, a farm boy who lived through an Oklahoma dust storm in 1935, marks a significant moment for the American Catholic Church, said Kathleen Sprows Cummings, director of Notre Dame’s Cushwa Center for the Study of American Catholicism and author of the forthcoming book “Citizen Saints: Catholics and Canonization in America.”

However, it “would have been even bigger” if not for other recent milestones, Cummings said.

The first beatification Mass to occur in the U.S. happened in 2014 and recognized a New Jersey-born nun, Miriam Teresa Demjanovich. The only saint to be canonized on U.S. soil was Junipero Serra, a Spanish missionary whose rite was performed by Francis in Washington, D.C., during his 2015 trip. A U.S. priest, John Neumann, was canonized in 1977, but he was born in Bohemia.

“Canonizations and beatifications always have special meaning for those who feel an affinity with the new saint or blessed by virtue of a shared profession, state of life or geographical territory,” Cummings said in an email. “While canonization is fundamentally about holiness, it is rarely only about holiness. It is often about what captures the Catholic imagination in particular times and places.

“The church is beatifying Stanley Rother not only because he was a holy person,” she added. “The church also beatifies him because it recognizes that the manner of his life and death has inspired a dedicated group of the faithful to want Father Rother to be remembered as a holy person.”