Mike Huckabee doesn’t want a pulpit or the presidencyprojo.com horoscope Mike Huckabee announced his candidacy for the Republican nomination in the 2016 presidential election but suspended his campaign on Feb. 1, 2016, and became an active supporter of Donald Trump. Photo courtesy of Mike Huckabee September 29, 2017 By Adelle M. Banks ShareTweetShare

(RNS) — Former Arkansas Gov. Mike Huckabee has been a minister, a politician and a broadcaster. He’s combining all those roles in a new talk show on Trinity Broadcasting Network that is set to feature President Trump on its Oct. 7 premiere.

Huckabee, 62, talked with RNS about the president, being the dad of a now-famous daughter and relations between the administration and evangelicals. Huckabee also revealed his perhaps surprising responsibilities at Destiny Worship Center, the nondenominational evangelical church he attends in northwest Florida.

The interview has been edited for length and clarity.

President Trump is going to be your first guest on “Huckabee,” your new TBN show. What are you hoping to get from this interview that others haven’t?

I think because we have a good personal relationship, he’s going to be relaxed and I trust that he’s going to feel comfortable in answering and discussing things. So many times people want to ask him: What is your tax plan? What is the health care plan? What are you going to do about Puerto Rico? I want to talk to him about why: Why have you chosen certain things to be front and center?

Since the inauguration, have you personally met with the president, at the White House or elsewhere, and if so, what have you encouraged him to do or not do?

I have met on more than one occasion, talked to him on the phone as well as met with him at the White House several times. As far as the nature of the conversation, I always will protect that as not something I would disclose because I just never feel that’s appropriate, unless he says please go tell everybody I said this.

Is there anything that you could say was a topic of conversation, something that you were particularly concerned about that you brought to him?

There are certain issues very important to me — one of them being relationship with Israel. We discussed aspects of health care. We’ve also discussed his amazing press secretary and how good she is and how grateful he should be for her.

What’s it been like to be the father of the White House press secretary and seeing your daughter, Sarah Huckabee Sanders, in the spotlight?

I’m getting shirts made that say “Sarah’s Dad” because that’s how I’m now known. But I’m clearly very proud of her. I think she has a wonderful way of lowering the temperature rather than raising it. She also has great respect for the people who are before her in that press room. And she recognizes they have a job. She doesn’t take it personally that they are trying to ask tough questions or to ask it in a different way. But by the same token, she’s not going to give them a different answer to the same question asked slightly differently. 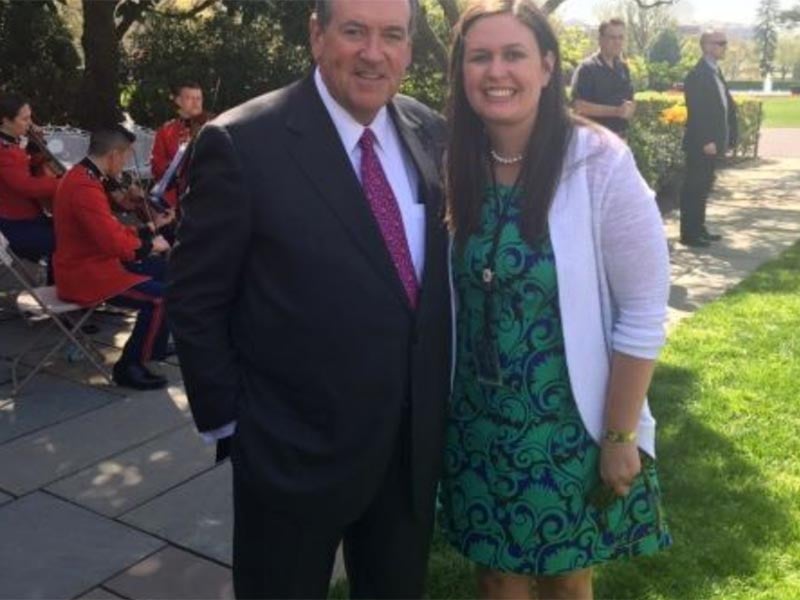 Do you watch the daily briefings, perhaps more than you might have in the past?

Without a doubt. A lot of times I may be traveling or have appointments or speeches and I’m not able to do it. But, typically, my wife will tape them. I’ll watch them when I get back.

You endorsed Roy Moore in the Alabama Senate race, noting his support of the Ten Commandments in public places. Why did you decide to support him?

I find it amazing that somehow people thought it was just bizarre that Roy Moore would think that having the Ten Commandments in a public place is OK since the very Supreme Court of the United States has them chiseled on their wall. But I think there was a couple of things for me with Roy Moore: One, he is a person who understands the separation of powers. And my reasoning was that I am so disgusted with the lack of accomplishment in the GOP Senate. And they don’t even do some of the simple, small things that they could do like defund Planned Parenthood, which has long been an affront to many of us.

Given his past statements related to faith, do you think that Moore might try to move the country in a different way related to church-state issues if he gets elected?

No, I don’t think so. Unless he can convince another 50 people that it’s a great idea and then convince a majority in the House, it doesn’t necessarily happen.

Speaking of elections, do you expect that you will make another run for office yourself, for the presidency or other positions?

I can say definitively I will not. I’m not going to run for public office again.

You can only deplete your retirement funds, mortgage your house and spend your last bit of savings so many times and then you have to decide that maybe this is not a worthy endeavor. I had a wonderful time as governor and twice sought the presidency and it did not happen. You win some; you lose some. And if you lose you recognize, hey, voters have a choice and they made their choice and I respect it and I’ll move on.

What is your sense of the role of evangelicals within the Trump administration, on his Cabinet and staff?

Clearly, he has placed a number of prominent evangelicals in his Cabinet and staff and I think that says that here’s a person who is recognizing the value that they played to him administratively and politically. He’s got a much more inclusive approach than his predecessor did, to be sure. I can’t imagine that Hillary would have appointed any evangelicals to major Cabinet positions or staff positions.

And what influence have evangelicals outside the administration made on the president and his staff? Are invitations to meetings and prayers with the president making any substantive difference?

I believe they are, whether it’s in terms of helping the president to even shape his approach to disaster relief to recognizing the importance of helping people at the bottom of the economy through the tax proposals, recognizing the value of religious liberty as the fundamental liberty upon which all others are built.

Since you left the Southern Baptist pastorate in the 1990s, have you ever considered going back to a permanent position in the pulpit?

No. I mean, it’s never even been a consideration, not because it wasn’t a wonderful position. I’m active in my own church locally and will continue to be but I don’t see that as a role that I’m expecting to play in the future.

Lots of people say they’re active in their own local church, but what do you do there?

I drive the golf cart in the parking lot and I work in the parking lot team, parking cars and driving people up to the door, which has been a real joyous thing for me. In our church, everyone has to serve in some capacity. So when I looked at all the options I said, “You know what? That’s something I think I might enjoy.” So that’s what I do.

projo.com horoscopeMike Huckabee doesn’t want a pulpit or the presidency