Fall religion reading: Heavy-duty editionsagittarius this week love(RNS) Get serious with this list of 10 new or recently released books with religion (or no religion) between the covers. 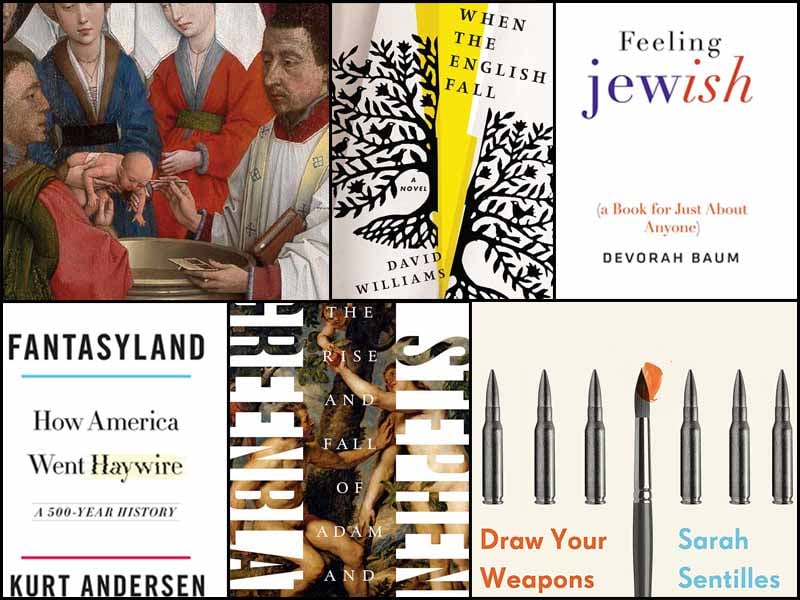 (RNS) — Fall is when reading turns serious again, after the light-as-a-breeze books of the summer. This list of new and recently released books reflects that return to seriousness, as many ask big questions to which there are few (if any) answers. Here, in alphabetical order by author, are 10 titles, both fiction and nonfiction, where religion (or the lack thereof) is part of the story.

Krauss’ novel follows two Jews — one a writer, one an attorney, neither aware of the other — whose successful, ordered lives begin to unravel. Both are pressured in some way to speak for “their people” and find they cannot. Both end up returning to Israel in an attempt to answer those questions and find that, perhaps, they cannot. Writing in The New York Times Book Review, Peter Orner said, “one of the beauties of this lucid and exhilarating book is that Krauss is unafraid, at times, to let it go where it will.”

“The Ninth Hour” by Alice McDermott

McDermott, a National Book Award winner for “Charming Billy,” tells the story of an Irish-Catholic widow and her newborn child taken in by Sister St. Saviour and her order of nuns in early 20th-century Brooklyn, N.Y. What follows is an inside look at the often invisible and unsung influence nuns have in a poor community. NPR’s reviewer Heller McAlpin said the book “evokes a narrowly confined, simpler, largely bygone world. But McDermott also addresses big, universal questions — about what constitutes a good life, and about how to live with the knowledge of ‘that stillness, that inconsequence, that feral smell of death.’” Look for this one to be a 2018 award nominee and potential winner.

“The Followers” by RebeccaWait (Europa)

“The Followers” by Rebecca Wait

A depressed and lonely waitress and her young daughter join a religious cult in their compound on the English moors. A terrible crime occurs and our heroine goes to prison — though we don’t know what for until the end. Wait’s first novel, “The View on the Way Down,” was also about religion and mental illness. But some critics have lamented “thinly drawn” characters in her second novel. Still, Guardian reviewer Sarah Crown called it “a great surging shout of a novel.”

“When the English Fall” by David Williams (Algonquin)

“When the English Fall” by David Williams

The subtitle of this first novel could be “Apocalypse Among the Amish.” A solar storm wipes out the modern world, leaving the Amish — who mostly shun modernity — relatively untouched. At least until the “English” — the Amish word for outsiders — come demanding food. Writing for the Los Angeles Times, Swapna Krishna took issue with character development, but said, “The glimpses into the Amish community are a welcome change from the typical speculative fiction narrative. Williams presents something fresh and new with this choice.”

Andersen, host of “Studio 360” on public radio, tries to explain how we ended up with a billionaire television celebrity in the White House. Along the way, he shows how delusion is as American as George Washington’s cherry tree — which itself is a myth. Hanna Rosin, who reviewed the book for The New York Times Book Review, said the book is sometimes repetitive, but that its “most persistent thread” is Christianity. He also focuses on “secular spiritualists.” “They were supposed to be a counterpoint to narrow-minded evangelicals,” Rosin writes, “but Andersen says the New Agers committed an even greater sin than the faithful.”

“Feeling Jewish (A Book for Just About Anyone)” by Devorah Baum

In her first book, a critic looks at the works of Anne Frank, Woody Allen, Franz Kafka, Philip Roth and others to ask, “What does it mean to ‘feel’ Jewish?” Her answer goes beyond religious and secular Jews to encompass other cultures, other religions. Kirkus Reviews ruled the book “an impressive work of intellect” and said Baum “produces a wide-ranging, deeply original inquiry into modern life.”

“The Meaning of Belief: Religion from an Atheist’s Point of View” by Tim Crane (Harvard University Press)

“The Meaning of Belief: Religion from an Atheist’s Point of View” by Tim Crane

Crane, a British philosopher, argues many of his fellow atheists think about religion incorrectly. It is not a result of ignorance, bigotry or superstition, but an impulse towards something transcendent and a feeling of being a part of something. Publishers Weekly called the book a “valuable and compact contribution to the dialogue between atheists and believers.”

“The Rise and Fall of Adam and Eve” by Stephen Greenblatt (W.W. Norton)

“The Rise and Fall of Adam and Eve” by Stephen Greenblatt

Greenblatt offers something of a biography of the story of Adam and Eve, following them well beyond the Bible into art, literature and even other faiths and cultures (Gilgamesh, anyone?). The goal is to answer the questions of why we are here and what makes us human. Greenblatt has bookends — both a National Book Award and a Pulitzer Prize for “The Swerve: How the World Became Modern” — and he will likely be a contender for another set for this book, which is being hailed by almost breathless critics as “enthralling,” “thrilling” and “fascinating.”

“The Infidel and the Professor: David Hume, Adam Smith, and the Friendship that Shaped Modern Thought” by Dennis C. Rasmussen (Princeton University Press)

“The Infidel and the Professor: David Hume, Adam Smith, and the Friendship that Shaped Modern Thought” by Dennis C. Rasmussen

This dual biography examines the long relationship between Hume, the Enlightenment philosopher and skeptic of religion, and Adam Smith, the father of modern capitalism. The book has been well-reviewed for its accessibility to the nonacademic reader. Biancamaria Fontana said in Times Higher Education the book “reminds us of what the social sciences were originally meant to be: a broad critical reflection on the condition of human beings exposed to the bewildering transformations that modernity brought to their lives.”

“Draw Your Weapons” by Sarah Sentilles

Sentilles, the author of “Breaking Up With God” and “A Church of Her Own,” said she was inspired to write this rumination on war and imagery by the theological discussions prompted by images of war crimes committed at Abu Ghraib prison in 2004. Writing for The New York Times, John Williams praised the book as “unclassifiable” and one “in which Jesus and Colin Powell mingle with Roland Barthes, Susan Sontag and Lucretius.”