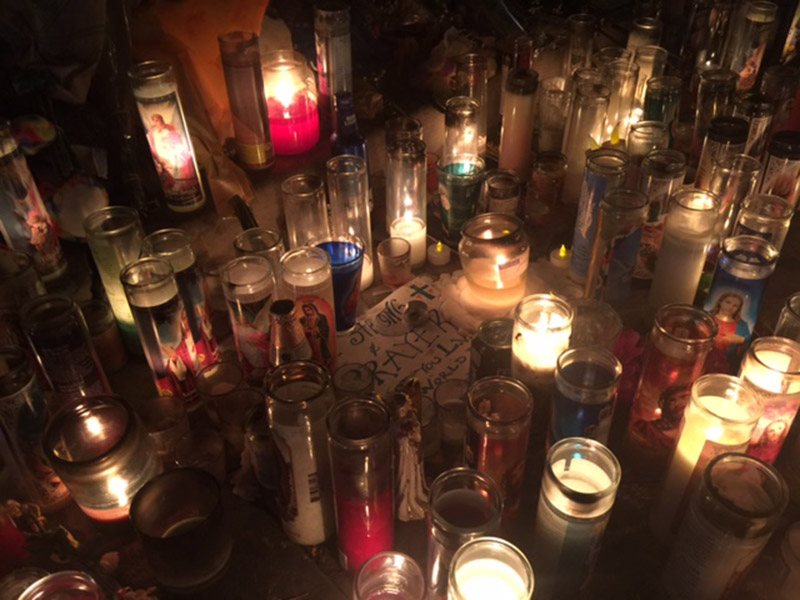 A spontaneous memorial to the victims of the Oct. 1 mass shooting in Las Vegas, shown in this photo taken on Oct. 7, 2017. RNS photo by Kimberly Winston October 8, 2017 By Holly Meyer ShareTweetShare

NASHVILLE, Tenn. (USA Today) — As law enforcement pieces together answers about the deadly mass shooting in Las Vegas, the suffering caused in the attack also raises deep philosophical questions about God and evil.

President Trump called the violence that killed 58 people plus the shooter and wounded hundreds an “act of pure evil” during his Monday (Oct. 2) address from the White House. Trump pointed to Psalm 34 to comfort the nation.

“Scripture teaches us the Lord is close to the brokenhearted and saves those who are crushed in spirit,” he said.

The president’s comments tap into hard-to-answer questions many ask in the aftermath of extreme violence like what unfolded a week ago at a country music festival. Why does God allow evil to exist? Why didn’t God intervene?

The questions arise because of two conflicting ideas: a person capable of horrific violence and a loving, kind and grace-filled God who created humans in his likeness, said Phillis Sheppard, a Vanderbilt Divinity School professor.

While the Las Vegas attack is considered the deadliest mass shooting in modern U.S. history, humans have harmed each other for millennia. Accounts of violence and humans grappling with it can be found throughout the Bible too, she said.

On Oct. 1, a shooter fired into the Route 91 Harvest festival crowd from the 32nd floor of the Mandalay Bay Resort and Casino complex on the Las Vegas Strip, authorities said. It appeared that the suspect, Stephen Paddock, then killed himself.

Just one week earlier, in Nashville, another shooter opened fire at Burnette Chapel Church of Christ, killing one woman and injuring seven people.

The minister, Joey Spann, leads the small congregation and was shot after a Sunday morning service. He does not believe God causes the violent attacks but does believe God allows them to happen.

Humans have free will to make their own decisions, Spann said. They can choose to do good or to do bad.

And they can choose love, too, he said.

“A lot of these times God gets the blame for what we choose to do,” said Spann, whose wife also was shot and remains in the hospital.

God can intervene, but Spann couldn’t guess why God did not stop the shootings on consecutive Sundays. While Spann has his own questions, he trusts God’s wisdom and is reminded that as a Christian he was promised a “perfect city” in heaven — not on earth.

Yet the quick succession of violence is still startling.

“It seems like it’s always so soon after. Just imagine how God feels watching his creatures do this. It’s one after another after another ever since Adam and Eve,” Spann said. “We haven’t handled that free will real well.”

Southern Baptist leader Russell Moore, president of the convention’s Ethics and Religious Liberty Commission, believes mankind lives in a “fallen world” where awful events occur, he said in a blog post published Monday. Moore does not know why God did not intervene, but he believes that God stands against evil and violence.

“Our neighbors do not need us to provide easy answers to what is, this side of the eschaton (the end of the world), unexplainable. What they need, though, is a reminder for us that life is not the meaningless chaos it seems to be,” Moore said. “They need for us to weep and hurt with them.”

The Rev. Brian Hooper, a licensed psychotherapist and minister of pastoral care at First Evangelical Lutheran Church in Nashville, believes that God enters into people’s suffering with them.

Violence is the result of a person disconnecting from others and the Gospel is all about what God does to reconnect people to each other, Hooper said. That’s why he has been offering free counseling to anyone needing to talk about the Las Vegas attack.

“God is in the embrace of each other, the consolation, the binding of wounds, the companionship we offer to each other. That is indeed where God is,” Hooper said. “The freedom to hate is the freedom to love.”

Beliefs on good and evil are not universally agreed upon. On “The 700 Club,” Christian broadcaster Pat Robertson linked the Las Vegas attack to a disrespect for authority, including for Trump and the national anthem.

“We have taken from the American people the vision of God, the whole idea of reward and punishment, an ultimate judge of all our actions, we’ve taken that away,” Robertson said. “And when there is no vision of God, the people run amok,”

Sheppard said comments like Robertson’s are based on a “broken theology” and are unhelpful to those who are suffering.

She believes evil emerges as humans look away and do not build community nor advance justice. God intervenes through human action.

“It’s not OK to turn a blind eye to this. It’s not OK to avoid the hard questions here of what ills this reveals about our society,” Sheppard said. “We are God, being present.”

Making sense of suffering could lead to rationalizing it away and being unmoved to act, Tiechtel said.

“Stop looking for answers and start formulating a response,” Tiechtel said. “We should take our anger and turn it into a force for doing good.”