Spend any time watching television or scrolling through social media, and you’ll inevitably see advertisements for pills, powders and potions that promise to grow muscle, shed body fat, improve your focus and resurrect your youth.

Most of us have used them. At last count, the National Center for Health Statistics found that over 50% of all adults in America have used a supplement in the past 30 days. The center used data from 2017 and 2018, but more recent polls suggest this figure to be closer to over 70%.

Globally, the nutritional supplement industry was said to be worth over US$140 billion in 2020. Within the United States alone, this figure is estimated to be around $36 billion – despite evidence that the majority of these supplements do not work.

How did products with questionable benefits and expensive prices become so mainstream? Nutritional supplements are not a new phenomenon. Their history dates back at least 150 years, and they’ve been able to thrive in the United States thanks to false promises, fanatical adherents and weak regulation.

Stoking an appetite for alternatives

Given the outlandish claims that can adorn supplement labels, it is perhaps unsurprising that some of the earliest supplement enthusiasts were religious figures. Their supplements weren’t pills, but rather food alternatives.

Sylvester Graham, born in 1794, was an American Presbyterian minister who preached salvation through a vegetarian diet.

Part of Graham’s teaching centered on temperance and whole grain foods. Graham’s followers made and marketed Graham bread, crackers and flour with the promise that these products would promote righteous living and eternal salvation. 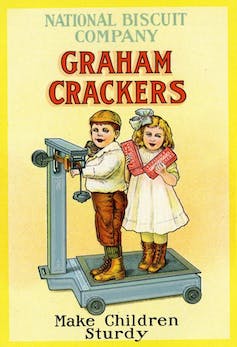 Graham crackers, which are made using course wheat flour, were pitched as a healthy alternative to traditional bread. Transcendental Graphics/Getty Images

While Graham didn’t officially endorse these products, his spiritual successor, Dr. John Harvey Kellogg, was an eager proponent of his family’s line of new foods. A doctor, inventor and businessman rolled into one, Kellogg ran his own health spa in Michigan – the Battle Creek Sanitarium – during the late-19th and early-20th century. Although he did not create cornflakes – that was his brother, Will – Kellogg was responsible for marketing flours, protein replacements, granolas and peanut butters. Like the Graham products, Kellogg’s foods were linked to improved health and virtue.

Graham crackers and granola may seem relatively benign compared to some health and wellness products sold today, such as detox teas and vitamin-enriched waters. But they were nevertheless important in promoting the still-powerful message underpinning most of the supplements we see today: This product will improve your health and your life.

Fitness supplements become all the rage

When teaching this topic to students, I recount a discovery made by historians John Fair and Daniel Hall when they were researching the history of protein powders.

Sometime in the 1940s, the American nutritionist Paul Bragg reached out to barbell manufacturer Bob Hoffman.

At the time, Hoffman was making a small fortune selling his York Barbell workout equipment throughout the United States. Bragg, meanwhile, had firmly established himself as a leading expert on alternative nutrition. Sensing a potentially lucrative partnership, Bragg wrote to Hoffman with an idea. 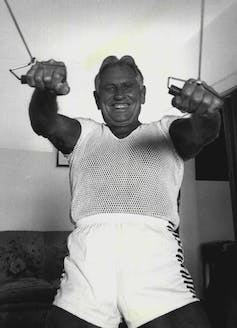 Dr. Paul Bragg saw supplements as a financial windfall because they would always need to be replenished. Stuart William Macgladrie/Fairfax Media via Getty Images

In the letter, Bragg told Hoffman the fundamental flaw in his York business: his products were durable. If someone bought a barbell set in the 1930s, it was likely they could still use it in the 1950s. Bragg recommended selling nutritional supplements, which would need to be replaced on a biweekly or monthly basis.

Hoffman decided to pass on partnering up with Bragg, but he soon recognized the idea’s potential. In the 1950s, nutritionist and bodybuilding coach Irving Johnson began selling protein supplements in Hoffman’s Strength & Health magazine. Made from soy, Johnson’s “Hi Protein” powder was a huge success.

Within a year, Hoffman banned Johnson from his magazine and began selling his own “Hi-Proteen” powder. Protein supplements, as an industry, grew in size and scope. Soy protein products were eventually replaced by milk protein powders in the 1960s. By the late 1990s several other derivatives, ranging from pea protein to collagen powders, existed.

The size and scope of other offerings grew with time. Vitamin and mineral supplements became popular in the 1950s. Energy drinks and energy boosters like creatine started flying off the shelves in the late 1980s and early 1990s. Prohormones – which purported to build muscle and were eventually banned – were introduced in the early 2000s. Each decade, profits ballooned, as did the creativity in the branding of the products.

Government authorities did little to stop them.

It wasn’t for lack of trying. The supplements industry and federal authorities have long been playing a game of cat and mouse.

When Hoffman and others began selling supplements, they were technically subject to the policies of the Food and Drug Administration. But during the 1950s, the FDA was ill-equipped to regulate nutritional supplements. However, some of the manufacturers’ outlandish claims and unhygienic practices started to attract the attention of the regulatory body, which soon sought to gain more control.

By the 1960s, Hoffman – who routinely claimed his products added pounds of muscles in rapid time – became a target of the FDA. The secret to his Hi-Proteen powder? A large mixing vat in which he stirred Hershey’s chocolate powder together with soy protein powder using a rowing oar.

Hoffman was regularly censored but never stopped. During the 1960s and 1970s, the FDA regularly locked horns with manufacturers for their lax production methods and incredulous claims.

The problem was that the FDA was never able to fully regulate the industry.

From 1968 to 1970, Congress held several public hearings on the FDA’s plans to regulate supplements. Legislators, supplement trade associations, manufacturers and citizens discussed restrictions and bans on certain products, such as making it illegal to sell supplements with nutrients in excess of 150% of daily intake recommendations.

Public and private outcry stopped such plans in their tracks. The FDA was forced to engage in light-touch regulation. In 1975, a court ruling allowed supplements to advertise themselves as natural. One year later, the Rogers Proxmire Act prohibited the FDA from imposing limits on vitamin and mineral amounts in supplements.

The FDA retained the right to pursue baseless or misleading claims, but this did little to slow down the industry. The number of products continued to grow.

Put simply, it became impossible to oversee what went into products. This also explains why so many supplements include a note to say they are not FDA approved or endorsed.

In the early-1990s the FDA resumed its efforts to regulate the supplement industry. In particular, the agency wanted to increase its own enforcement powers while simultaneously making it illegal to advertise therapeutic claims on supplement labels. Once more, private lobbying and public outcry watered down the agency’s powers.

In 1994, Congress passed the Dietary Supplement Health Education Act, which completely changed the nutritional landscape. Supplements were now classified as foods, not medicines or food additives. By classifying supplements as foods, and not drugs, the act lowered the burden of proof for manufacturer’s claims. 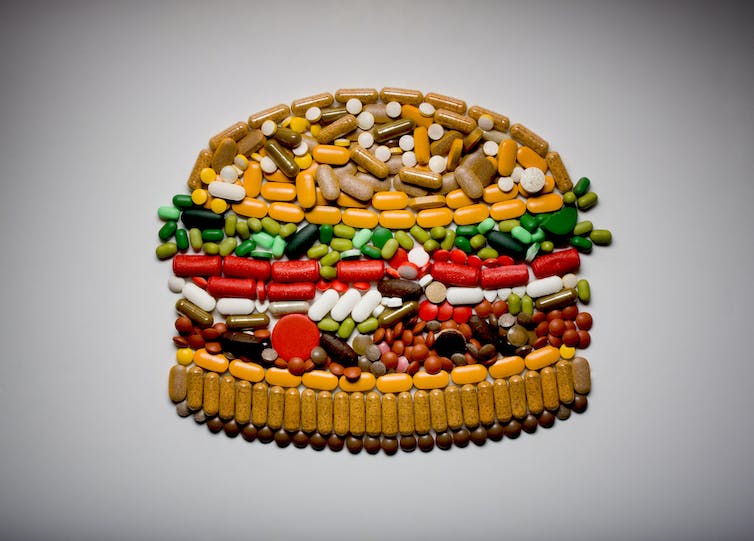 The legislation also expanded which products could be classified as a supplement – and, therefore, not be subjected to the FDA’s purview.

Today, responsibility is placed on producers to self-regulate their potentially harmful products. This does expose producers to lawsuits, but it can be a long and lengthy process for consumers. In effect, supplements are brought to market before being thoroughly tested. Thus, many products are sold despite containing banned substances.

A single promise wrapped in a pill

Since the mid-20th century, nutritional supplements have been promoted in a variety of ways within the United States. But acknowledging the differences in product, taste and price, they’ve generally been marketed based upon a single promise: This product will, in some way, improve your life.

Whether this is true or not for the individual product – some supplements do, in fact, work, with creatine being one example – it has become problematic at a broader level. Federal agencies in the U.S. have continually been impeded from correctly overseeing the market. Private lobbying and public outcry about the government wanting to “take away your vitamins” have encouraged malpractice and dangerous messaging.

Mel Gibson urges people to ‘Call the U.S. Senate and tell them that you want to take your vitamins in peace.’

A study from 2018 found 776 instances of unapproved pharmaceutical ingredients being added to supplements in the United States from 2007 to 2016. Many of these additions were relatively harmless. But several ingredients – from steroid compounds to banned weight loss drugs – were not.

Supplements might promise a great deal. But in reality, most of them are articles of faith.

[Over 100,000 readers rely on The Conversation’s newsletter to understand the world. Sign up today.] 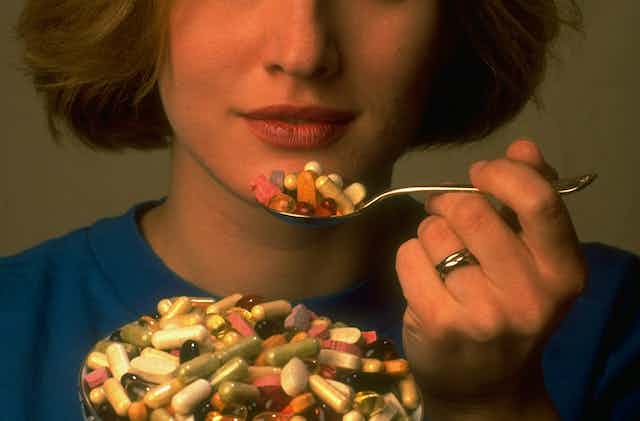