Australian ad promotes lamb as fit for the gods, offending some Hindusdec 18 sign

Australian ad promotes lamb as fit for the gods, offending some Hindusdec 18 signIndia has filed a complaint against an Australian ad showing a pantheon of gods, including the Hindu deity Ganesh, promoting lamb as “the meat we can all eat.” The problem — Ganesh, being Hindu, is a vegetarian. 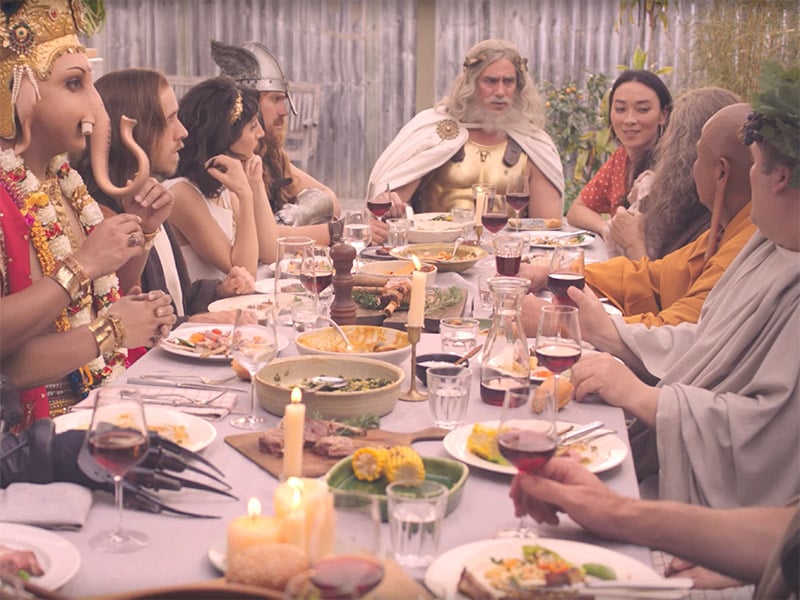 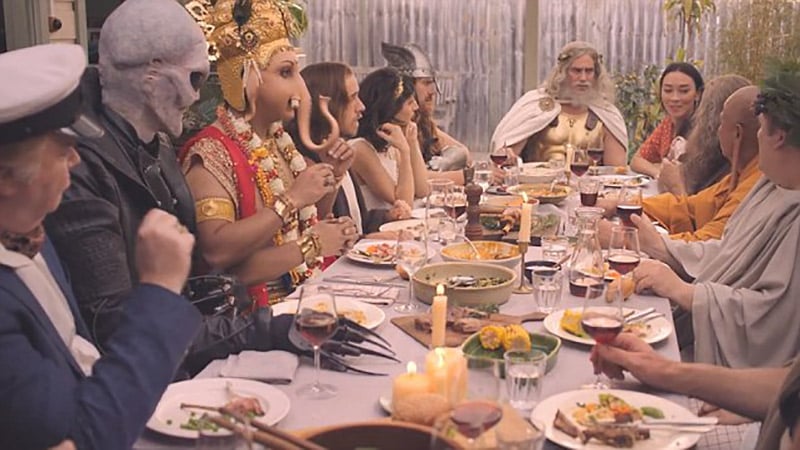 (RNS) — The wise dinner guest knows never to discuss religion or politics at the table. Add another subject to that list — lamb.

A new ad from the industry association Meat and Livestock Australia intended to promote lamb as a dish people of all faiths can share together. The commercial sets a banquet table fit for the gods — Jesus, Zeus, Moses, Buddha and a host of other prophets and gods sit down together, trading quips and chowing down on some good Australian lamb.

At the end of the commercial, Ganesh, the Hindu god with an elephant’s head, joins the divine diners in a toast to lamb, “the meat we can all eat.”

Except Ganesh, being Hindu, is a vegetarian. So some of his one billion followers in India are less than thrilled.

On Friday (Sept. 8) the High Commission of India formally complained about the ad, claiming it is “offensive” and hurtful to the Hindu community.

That move came after some in the Australian Hindu community — about 440,000 strong — also dissed the two-minute spot.

“I don’t think they realize how revered a God Ganesha is within the Hindu community,” Nitin Vashisht  of the Indian Society of Western Australia told the Australian Broadcasting Corporation. “[He is a] vegetarian teetotaller, and that’s really God for us and most of the Indian community.”

Not present at the meal is the Prophet Muhammad. Muslims consider images of the founder of their faith to be extremely offensive. In the ad, Muhammad calls in (“Can’t make an appearance?” Jesus asks) claiming he has to pick up the kids from daycare. Muslims are permitted up to four wives.

Meat and Livestock Australia loves edgy commercials and produces one annually for Australia Day, a national holiday celebrated Jan. 26. Its 2016 version featured ex-patriate Australians being “extracted” by a military team and rushed home for a lamb chop binge.

All successfully make it for the barbecue, save one — an Aussie vegan living in Brooklyn who instead has his kale torched. Vegans complained to the Australian Advertising Standards Board that the ad promoted “violence against vegans.” The kale industry, perhaps used to being abhorred, did not react.

Andrew Howie, a spokesman for Meat and Livestock Australia, said the 2017 ad was not meant to offend, but to “acknowledge that lamb is a meat consumed by a wide variety of cultures and capture how the world could look if people left their differing views at the door and came to the table with open arms, and minds.”

The commercial should get high marks for inclusivity. Jesus, Moses and Buddha rub elbows with Dionysus, Aphrodite, Thor, Confucius, Isis and even L. Ron Hubbard, who asks Kuan Yin, the Buddhist goddess of compassion, “Have you ever considered Scientology?”

“Ron, Ron,” chides Moses, “let’s not get into religion at the table.”

There’s also a Jedi and an alien at the meal. The one mortal is the hostess, a young woman who says, “It’s a nightmare catering to you lot with all your dietary requirements.”

When Zeus asks what religion she is, she replies, “I’m no religion, which is the fastest growing religion in Australia.”

dec 18 signAustralian ad promotes lamb as fit for the gods, offending some Hindus