Kenneth and Irene Hernandez pay their respects as they visit a makeshift memorial with crosses placed near the scene of a shooting at the First Baptist Church of Sutherland Springs, on Nov. 6, 2017, in Sutherland Springs, Texas. A man opened fire inside the church in the small South Texas community on Sunday, killing and wounding many. (AP Photo/Eric Gay) November 7, 2017 By Emily McFarlan Miller ShareTweetShare

(RNS) — The mass shooting at First Baptist Church in Sutherland Springs, Texas, hit close to home for Russell Moore, head of the public policy arm of the Southern Baptist Convention.

First Baptist is part of the SBC.

After the gunman Sunday (Nov. 5) took the lives of 26 churchgoers between the ages of 18 months and 77 years old, Moore was called upon to react as the president of the convention’s Ethics and Religious Liberty Commission. But he also felt the horror of it as a fellow Baptist.

“There’s a kind of personalization of this shooting in an extraordinary way with people who are Baptist churchgoers because we can imagine being in the very same situation as those who were so wickedly killed,” he said.

“I think there’s a great familiarity with the rhythm of a worship service which makes, for churchgoers, the horror of this even more viscerally felt.”

Another church shooting. Lord have mercy.

Moore talked to RNS about Southern Baptists’ responses to the killings, believers’ varying opinions about gun control and how churches remain resilient in the face of such tragedy. This interview has been edited for length and clarity. 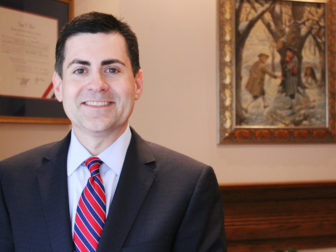 Russell Moore at the Washington offices of the Ethics and Religious Liberty Commission. RNS photo by Adelle M. Banks

How are you seeing Southern Baptists respond to this tragedy? There are two SBC groups in Texas — are they coming together to rally around this church?

They really are, yes, and they have in several other instances in recent days — (Hurricane) Harvey in Houston also drew them together. I see Southern Baptists all over the country in solidarity with First Baptist Sutherland Springs. I think that every Southern Baptist church I know of will be having a special time of prayer this Sunday, if not before.

I think that many churchgoers are reflecting today on our vulnerability and on the wickedness that exists in the world around us. We know that from the Scriptures, but I think it’s especially felt this week.

RELATED: Local Christians, and some Muslims, surround a grieving town with love

We’ve heard many people offer their thoughts and prayers. Are prayers enough? What action can Christians take to make these tragedies less likely to occur?

I think there is a sense in which some of these calls for specific, immediate legislative action ironically serve the very purpose that those promoting them accuse those asking for thoughts and prayers of doing, which is a cathartic sort of immediate reaction, whether or not that actually solves the problem.

When we’re looking at this horrific evil, Christians can disagree about what specific policies ought to be enacted. What I don’t see is Christians debating whether or not shootings are right or wrong. We stand together on that. Where we have differences is what we think will work in terms of curtailing that, and I think that’s a prudential discussion and Christians are going to going to end up in different places on that.

Does the SBC have a stance on gun control?

No, there hasn’t been a resolution on that.

Are Southern Baptists divided on the necessity of gun control and, if so, do you expect a shift in some views after some of their own have been killed?

Some Christians consider gun control a “pro-life” issue. The SBC is strongly pro-life. Do you see gun control as a pro-life issue?

No, because in the abortion debate, one side is depersonalizing the victims as not having human rights. That’s not what’s happening here. No one is advocating violence and shooting. People are disagreeing about what means are constitutional or effective. That’s a very different conversation.

As the person directing public policy for Southern Baptists, do you have a stance on gun control?

I, personally, have a stance in that I don’t think that any gun control measure that I’ve seen would be effective in addressing these issues.

I hold to conservative views on the Second Amendment, but I don’t hold to my views here in the way that I would something clearly revealed in Scriptures. I certainly don’t hold to those things the way that I would the fundamentals of Christian doctrine and ethics, which is why I have very close co-laborers in Christ who are proponents of gun control. They haven’t persuaded me of that, but I don’t see them as being on another “side.” We both are looking toward the same goal.

Do you support training Southern Baptists to use guns, if necessary, in their churches?

Well, I wouldn’t call for some sort of vigilante justice, but I haven’t heard anyone who is.

Churches are considering whether or not their security plans are well thought-out. I think that’s a wise conversation to have. Every church I’ve ever been a part of has always had a security team — usually, those who are police officers or are retired police officers who understand and know what security contingencies ought to be.

No series of plans, of course, can rule out something horrible happening, but a congregation is wise to think through how they ought to do everything they can to keep people safe.

You wrote in The Washington Post that as long as Christianity has been around, people have tried to terrorize worshippers — and they never succeed. Why?

That’s one of the reasons Christianity has not only bounced back from terrorist actions against it throughout history, but thrived in those situations. The church tends to whither when the church is contented with the world around it and becomes just like the world around it.

The church’s understanding of safety is different than that of the terrorist who would try to wipe us out. Martin Luther said the cross is the safest of all things, and I think that sums up well a Christian understanding of suffering.

Any final encouragement for the folks at First Baptist Church in Sutherland Springs who are dealing with this tragedy and other Christians around the country who may be feeling fearful or angry this has happened again in the country?

I think that everyone I have talked to — church leaders and pastors and others —  are all thinking in what I think is the right direction, which is to stand together with those at First Baptist. Some of them in Texas seek to minister to them directly; others around the country stand with them in prayer. And then congregations are thinking through what they would do if, in their community, God forbid, something horrible happened.

This is a moment where the Church — the big “C” Church of Christians — are standing united. I think that’s a sad reality that has driven us to this, but I think it’s a reminder of the hope that we have of life that overcomes death.