Announcements! Yes, more, because the world of queer tarot just keeps gettin’ better. These are all rad projects that are happening or have recently happened on Kickstarter:

Tarot veteran extraordinaire Rachel Pollack will be writing the book for Emi Brady’s forthcoming Brady Tarot, which has somehow managed to make a perfect deck even more perfect. I guess this is what happens when your Kickstarter triples its goal.TABULA IDEM is a queer tarot comic anthology with an accompanying majors-only deck, which tells queer stories through tarot cards. You can support the project here!The Slutist Tarot is a mystical celebration of sex positivity that centers femmes, sexual deviants, divine whores and curious maidens, from the online magazine of the same name. It’s Kickstarting now!

So here’s a question: What do you call your court cards? By this I mean the 16 ‘people’ of the tarot, usually named the Page, Knight, Queen and King; a royal family for each of the four suits. They tend to represent people or elements of people, rather than situations (though that’s a general rule, not a hard-and-fast one!) and we usually think of them as having the characteristics of actual humans.

To my mind, the King/Queen binary hierarchy is just another way tarot can reinforce gender nonsense, but the good news is, as with all things tarot, you don’t have to follow the rules! Many deck creators choose to rename these cards, for various reasons. Some wish to sidestep the royal hierarchy inherent in this system, others to strip out the gendered elements. Another reason is to find better ways to express the qualities of the card. 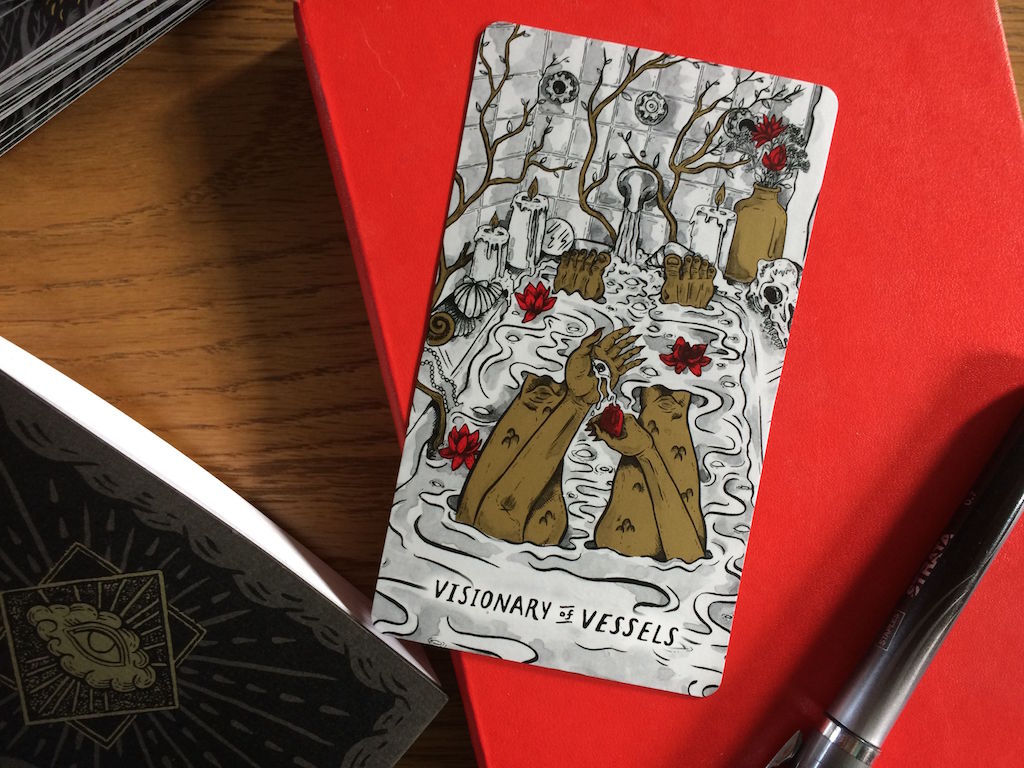 Visionary of Vessels, the Slow Holler Tarot’s answer to the Queen of Cups

I’m down with all three of those adaptations! Any approach to tarot that opens space for alternative interpretations or the challenging of gender perceptions is a-ok with me. (I also like the way that some artists choose to refer to these cards as ‘face cards’ rather than ‘court’, again moving away from that hierarchy. I’m trying to make this my habit, too.)

The creators of the decks below have each chosen to name their face cards in a pattern different to the traditional Page, Knight, Queen, King. I love that each style of renaming brings something different to the way we perceive these characters. Let me know which approach works best for you in the comments! 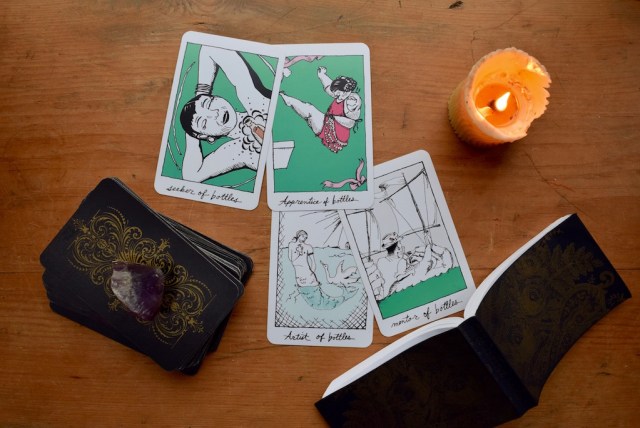 The Collective Tarot was the first I encountered in which the face cards had been renamed, and it was a huge breath of fresh air. The curiosity imbued in the ‘Seeker’ delighted me, whereas the active commitment of the ‘Apprentice’ gave me a new appreciation of the traditional Knight. Meanwhile the inner world of the ‘Artist’, discovering and expressing inner landscapes, and the ‘Mentor’, using skills honed over a lifetime to leach and empower others, felt like exciting and radical re-visionings of the traditional Queen and King.

The Tarot of the Crone 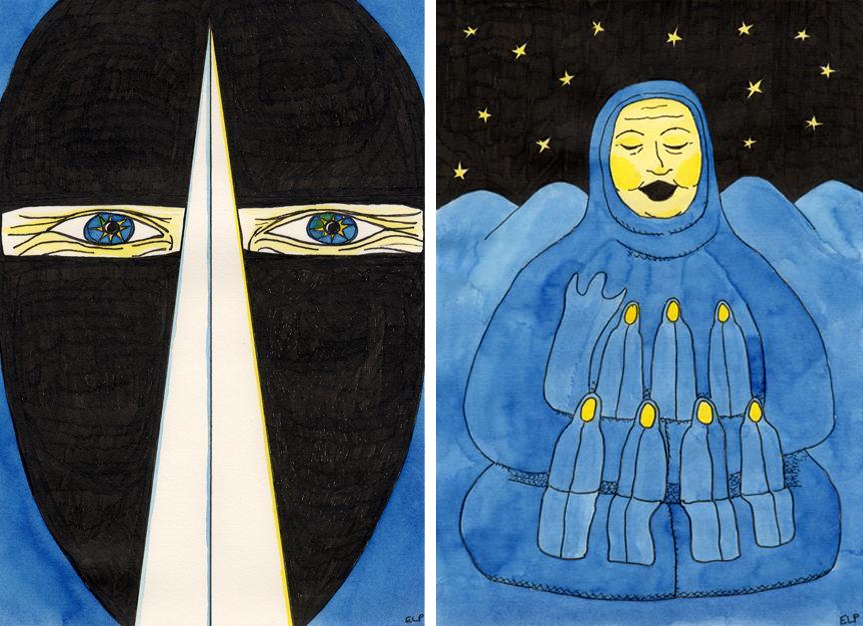 Witch of Swords and Grandmother of Swords © Ellen Lorenzi-Prince, via darkgoddesstarot.com

Another feminist deck, Ellen Lorenzi Prince’s Tarot of the Crone (soon to be back in print – hurrah!) names its cards after four faces of an older woman. Beginning with beast and ending with shadow, I freakin’ love the way this deck overturns any notion of an ‘old crone’ as someone meek or decrepit, but uses these four faces to express different approaches to the awesome power of the crone:

From the Tarot of the Crone booklet by Ellen Lorenzi Prince, via Aeclectic. 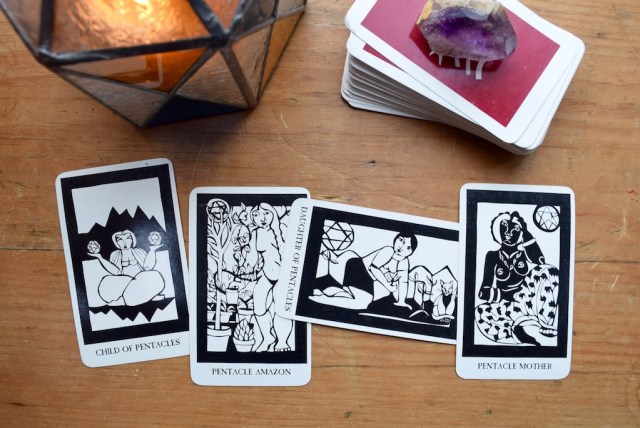 As a feminist, lesbian deck, all characters in Ruth West’s Thea’s Tarot are female-presenting. I love the openness of the ‘Child’ (Page), the wild, strong, determined ‘Amazon’ (Knight) who really feels like she’ll fight for what she believes in (even if she’s sometimes misguided). I also appreciate the alternative partnership of ‘Mother’ and ‘Daughter’ in place of King and Queen, to me, this celebrates the strength in what is for many women an incredibly important and formative relationship. 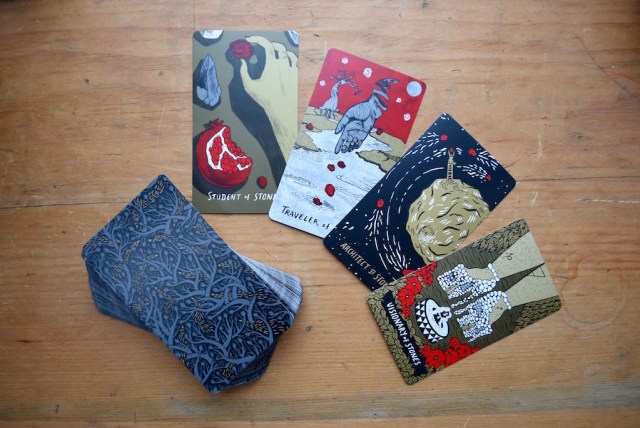 I think the collectively-created Slow Holler Tarot’s are my favourite renamings of court cards. I love the simplicity of ‘Student’, which is just exactly how I begin interpreting Page cards. I love the dynamism in ‘Traveller’ (Knight), and the authority and strength of the ‘Architect’ (King). And ‘Visionary’? Wow. What an incredible way to convey the way a Queen communicates from a place of real inner strength and understanding.

Aside from the ‘degrees of experience’ conveyed by the Slow Holler’s renaming, I also love that they choose to place the Queen-equivalent as the final card in the face card sequence (as in, it would come ‘above’ the King in a standard hierarchy, or would be the last card in a gradual maturation, as in many of the decks in this article.) I always felt that the queen’s tendency to go deep within and use the qualities of their suit for personal growth and transformation felt like a step onwards from the king’s typical ability to express their suit outwardly and lead others. 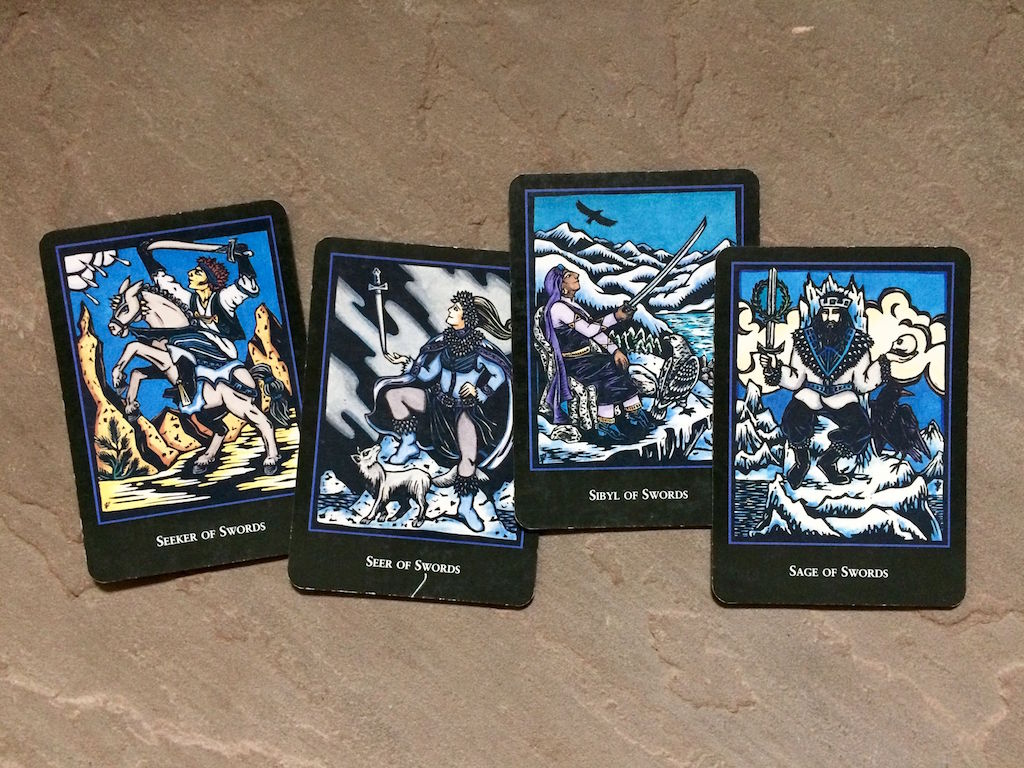 Again, tarot creator Lauren O’Leary has chosen to consciously avoid the old European hierarchies of traditional tarot, and names her court cards after life stages and uses gender-neutral language. I especially love ‘Sybil’ — the oracular wise women of ancient Greece — in place of queen, which O’Leary describes as “governing their realms with ease.” 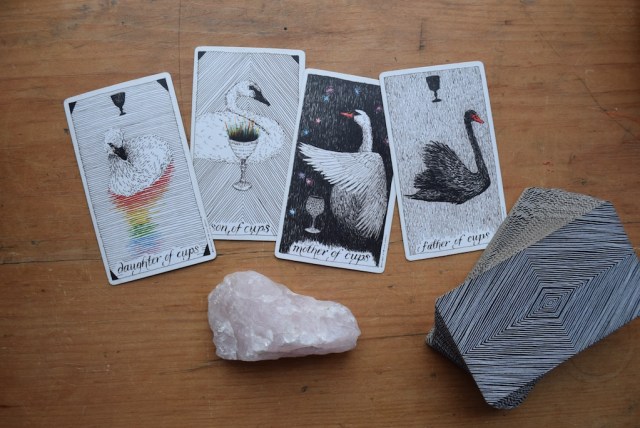 Not the most radical renaming, these face cards make up a ‘standard’ family unit — the four in each suit are all from the same animal family (snakes for wands, for example, or swans for cups). Though Kim Krans’ Wild Unknown Tarot is the deck I use most often in my work, I still find that I struggle with neutralising gender and queering these renamed cards. Still, I feel like this can a more accessible approach than the regal court, and I find that my querents really relate to this simple system.

There are plenty of other decks out there that rename the court cards! Which ones have I missed? Which of these reinventions works best for you?