“Merging my ancestral magic and my deep elevation of the universe over capitalism and materialism has been a long journey,” says Cristy C. Road, a journey that’s at least partly realized in her new — and long-awaited — Next World Tarot. 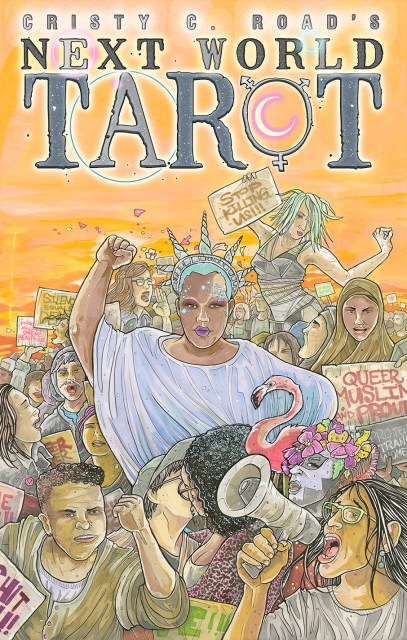 by Cristy C Road for Next World Tarot

Each card in the deck features Road’s illustrations — mostly portraits, pivotal moments of protest, or representational of concepts like the carbon bubble and total liberation — in what she calls an “oracle of resistance.” The magic in the tarot is in the assemblage of symbols, which vary from deck to deck. The tarot reader decodes all of this vital visual imagery and puts it to work, largely for help with decision-making and magic ritual. It mostly just leads to some really, really deep thinking.

“There is all this traditional symbolism that I get to work with and redefine,” she says. “I think the power behind symbols and imagery is mysterious and potent — we just don’t always get to see it until the art itself becomes a bigger part of our life.”

It is with this philosophy that Road folds the stories of 78 iconic, symbolic illustrations into the suits and stars of the traditional Major/Minor arcana format. Tarot imagery is by nature eclectic, as artists and tarotists continue to create their own symbology. Rider-Waite, the most-printed tarot deck, which hails from 1910s London, reflects a lily-white Medieval antiquity with which a majority of modern day readers don’t connect. Cristy’s symbolism comes from a collective consciousness, told in bits and pieces by those who are featured in the deck, many of whom reflect the people around her. 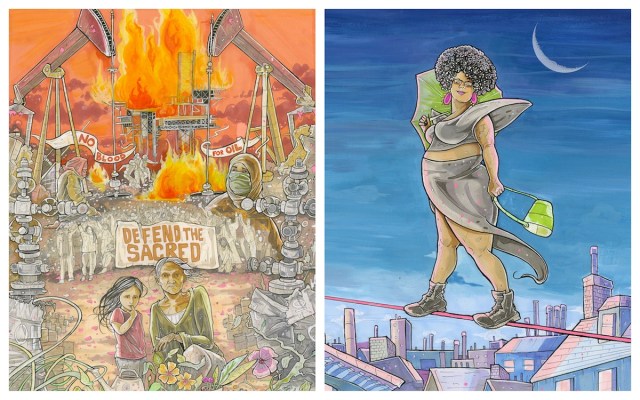 Evoking historical imagery is a tool of resistance, and the Next World Tarot celebrates a present community that embodies “antique” tarot icons like Fool hanging out in Yonkers to Justice on the front lines of the resistance. Instead of ancestors offering guidance, the Next World Tarot offers cards like Revolution, a woman and a child protecting a garden of luscious plant life while the fight to Defend The Sacred blazes on behind them. The community support around the creation of this deck — Road was able to focus on finishing the illustrations largely due to tremendous peer support and a preorder campaign, and the deck gained an advance cult following — only magnifies the unity that Next World Tarot establishes by bringing together this chosen group of icons, mixing the symbology of Tarot with the wisdom of ancestor worship and positing that these 78 revolutionary individuals and experiences are modern-day saints.

For Road, working with her ancestors “has enabled a sense of security and awareness, and that grounded feeling is such a huge goal in regards to survival,” she told me in our interview, which was focused on how art and magic intersect for artists with Yoruba-based spiritual practises. “I have always been aware of a magical realm that is a vital part of survival — a part that was destroyed by colonialism.” She now turns that attention to Next World, which boldly defines a future generation of saints. 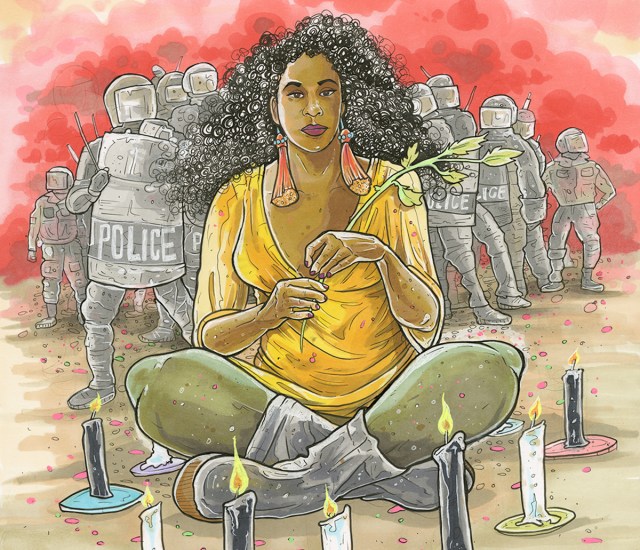 Road says she didn’t explore her spiritual connections — located in the historical roots of Santería— for a long time because sexism and white supremacy leaked its way into her culture (she was raised in Miami) and dominated the religious culture around her. “That’s why I looked for punk rock,” she says.

“In the end it’s all about sacred creations healing me,” she says of her spiritual life. “I can’t deny what I get from herbal medicine, a conversation with a ghost, or a song that changes my life.” 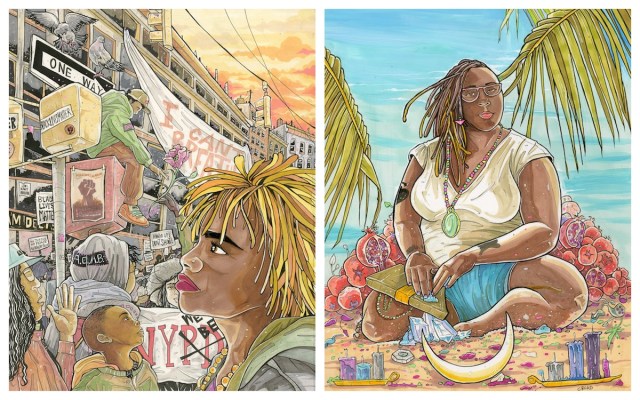 Santería, one of the starting points for Road’s intersectional work around resistance, survival and spirituality, is an African diaspora religion based in the Caribbean that reflects elements of Roman Catholicism and Yoruba. Yoruba religion has its roots primarily in southwestern Nigeria and surrounding regions, reflected in modern practise as Santería, Trinidad Orisha, Brujeria, Hoodoo, Haitian Vodou and Louisiana Voodoo. In Yoruba tradition, any attention paid to your spiritual self is said to bring you joy. By paying attention to your spiritual self from a young age, your ancestors may seem more apparent to you or come to you sooner, when elements of their spirits take hold in your body.

The practise of connecting with your ancestors and receiving their wisdom is central to Road’s spirituality, despite knowing that making these connections in a capitalist and colonial world is bound to be hard. She says she’s learned that stuff like romantic couplehood and self-care are part of the capitalist structures that don’t lead to connectivity for her, and instead further the pressure to feel worthless or not whole. After struggling with depression, anxiety and PTSD, Road says she is learning to heal from trauma that has left her with those feelings of worthlessness. “I either feel detached from my work, or like I am just my work,” she says, referring to what it feels like to experience trauma as an artist. “It feels far away from my actual body,” she continues. “The idea of total connection is a feeling I’ve wanted from just existing and doing what I do for a long assed time; but simply just eating vegetables, meditating and taking the right herbs is not enough.” She also says:

“I started decolonizing my surroundings and speaking to the roots of my identity: making altars for my ancestors who wanted to help me, discovering that connection between my body and the earth / universe that is fueled by plants and ancestral medicine and rituals in conjunction with the moon and the sun, truly working with the earth and resisting capitalism and colonization but in the context of an urban life. Finding out what that truly looks like, accepting that I needed my roots but couldn’t run back to Miami. Pairing that with the total ownership of my creative goals and identity (that’s definitely shone since finding punk rock) is what I’ve needed for a long-ass time.” 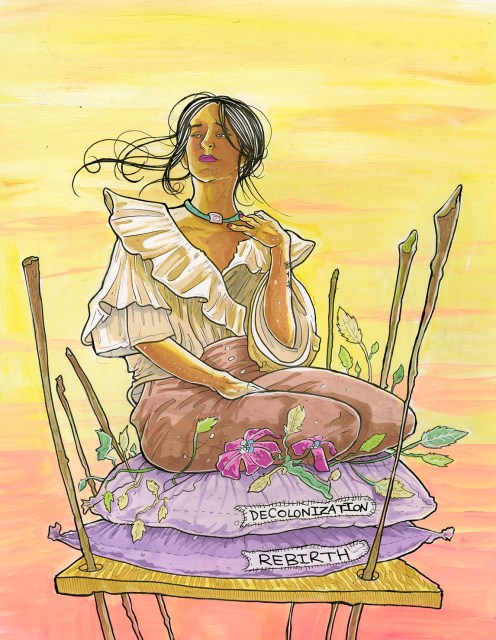 by Cristy C Road from the Next World Tarot

A tarot deck was not built to tell the truth or a certain past or history. It relies on the power of communication to suggest possible outcomes and possible routes of action based on intuitively assigning meaning to a common set of symbols. How do you read Cristy’s cards?

“I’ve always included subliminal details that not everyone understands, but everyone defines on their own. That is really special to me,” she says.

It will be easy to use if you follow your own instinct and inquire within.