2020 Is the Year of the Emperor; Are You Ready to Combine Structure and Growth?30 october horoscope

2020 Is the Year of the Emperor; Are You Ready to Combine Structure and Growth?30 october horoscope

Now that we’ve had a few weeks to settle into 2020, it might feel a little bit different than we were expecting. Those intentions that seemed so firm might be wobbling, those goals that felt within reach may feel harder to grasp, and we could be second-guessing the things we set out to achieve. And whether you did a big new year’s ritual with candles and crystals and tarot readings or preferred to say goodbye to 2019 with little magical fanfare, chances are you’re still feeling the shift that’s taken place, especially after the recent intense eclipses and planetary shifts.

Tarot and astrology often get grouped together, with both exploring patterns between elements and archetypes, seasons and cycles – and while these practices are very different, and are rich and full on their own, they do blend beautifully to help us find more powerful insights. But in spite of my regular tarotscopes column and frequent work with both forms, I’d argue that an understanding of numerology may be even more important to the study of tarot, as it can help us make powerful connections within major and minor arcanas, as well as deepening our understanding of the relationships between the cards. 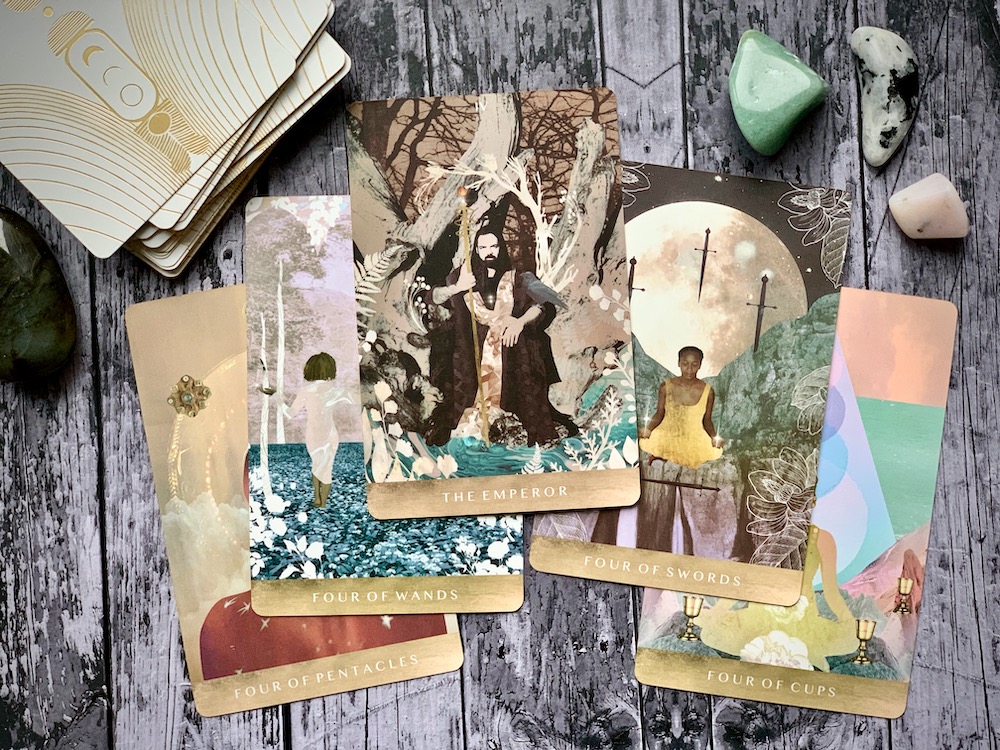 Numerology is just what it sounds like – a language of sacred numbers, tracing the patterns and meanings of specific digits and numerical combinations. Every one of us has a numerology chart, just like an astrological birth chart, as well as personal core numbers and life path numbers that can be calculated by combining digits and master numbers into root numbers. And while numerology portraits, birth and name charts, and destiny numbers are all fascinating and can be intensely personal, for now I want to focus on the more general and universal numerology of 2020, particularly as it relates to tarot.

We can quickly calculate the root number for the year 2020 by adding together each digit, giving us a year number of 4. In numerology, the number four represents order, focus, perfection, responsibility, practicality, logic, and growth. This is a detail-oriented energy, one eager to create structure, build foundations, and establish patterns for growth and success. 4 universal years are devoted to hard work and determination, to setting boundaries, to endless improvement – meaning that in 2020 we have the opportunity to organize our ideas into tangible goals, to turn potential into reality, to see our dreams become realized. And when we bring the number 4 to tarot, this organized, forward-thinking energy becomes especially clear in the fourth card of the major arcana: the Emperor.

One of the earliest cards in the major arcana, the Emperor is the first archetype to introduce ideas of structure and organization to the Fool’s journey. The Fool has had a brilliant idea, one that has shifted into a path they absolutely must follow – and after expanding their imagination and tapping into resources with the Magician, checking in with their internal wisdom and intuition with the High Priestess, and beginning the process of raw creation and manifestation with the Empress, the Emperor steps in to help give shape, purpose, and focus to this new direction. Intentions and goals are all well and good, but without putting structures and plans in place, they often fall by the wayside or get lost in more pressing daily responsibilities. It’s with the Emperor that we begin making concrete plans for the future, creating budgets and drawing up blueprints and building a long-term strategy for how we will achieve everything that we want.

Many associate this card with a king or political ruler, while others see it as a father figure, and depending on your background and experiences, these can be challenging roles to consider — and compared to the cards that come before it, the energy of the Emperor can feel controlling, limiting, or overly pragmatic; seemingly dedicated to stifling our dreams and forcing us to shift away from open, expansive creation into a more practical mindset. Especially as queer and marginalized people, the Emperor’s authority and discipline, as well as their connection to long-established structures and power dynamics, can feel uncomfortable, even make us angry. In traditional decks, this is a masculine archetype of power and control, of rigid structures, of rules and regulations: essentially a perfect encapsulation of the patriarchy, urging us to conform and assimilate, to surrender to the demands of someone else. But instead of giving the Emperor all of the control, or fighting against this kind of purposeful energy, we can use a modern, queer lens to see this card in a new, far more empowering and inclusive way.

The Emperor is more than a stubborn, demanding leader who only wants to impose their will on others. Instead, by embracing the energy of this card as our own, this archetype offers us the opportunity to get our shit together, to figure out how to take control of our lives and dreams and choices, and to build the kind of future we’ve been craving. This isn’t always an easy process, but setting up boundaries to protect yourself, making a plan to reach your goals, and finding structures that enable you to grow and expand can all be incredibly empowering. What are you navigating towards? How have you been stumbling? What processes or foundations or strategies might help you reach those goals? Whether you’re a freelancer realizing that your daily work needs more structure, a creative person who thrives within established routines, or a project manager who could benefit from instituting more developed business policies, harnessing the Emperor’s energy can help draw firm lines that encourage focused movement and more intentional action. This kind of organization not only allows us to keep our eyes on the prize, but it also creates spaces of safety, stability, and protection, which often then fosters deeper creativity, openness, and mutual trust. 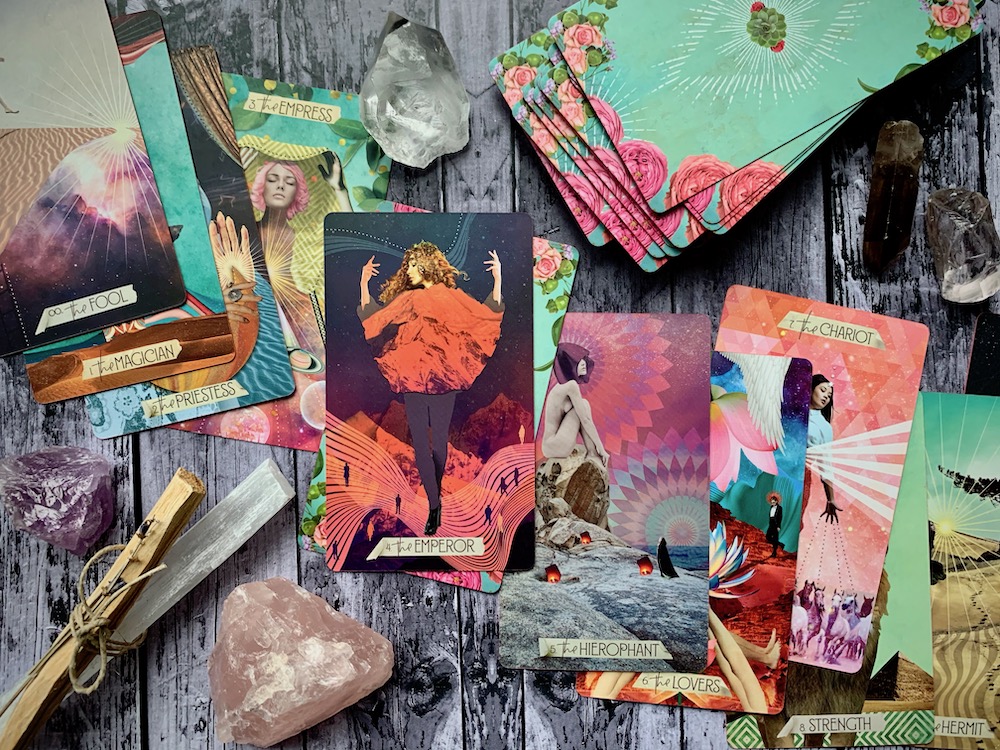 Putting it another way, the Emperor empowers us to take up space, to go after the things that we want. There are archetypes for retreat, for surrender, for quiet contemplation, but this isn’t it. Instead, the Emperor firmly and deeply believes that what they are building is important, even essential, and moves forward with plans to establish something brilliant, in a way that will last. Your plans, your dreams, your desires – they are allowed to expand and grow, to be something you devote time and energy to. By creating a real strategy for implementation, by thinking through how exactly you are going to achieve everything you want, you are demanding space for those goals, insisting that they are invaluable. The Emperor asks us to trust ourselves, to step into our destiny and our power and put our energy into manifesting the life we want for ourselves. As queer people, many of us have struggled against various structures, been marginalized or abused or pushed to the side simply for being different. The Emperor doesn’t have to be a symbol of everything that’s oppressed us, that’s harmed or damaged or traumatized us – instead, it can be an invitation to reclaim the foundations that have already been built, to shake them up and find ways to use them in new and empowering ways, or to tear them down and rebuild completely. How can we craft new traditions that reflect the people that we are, the systems that we need, the communities that we thrive within? So many have already been doing this work, and when we channel the energy of the Emperor, we can join them in establishing new structures that protect and uplift, building the kinds of communities and supports that are so deeply necessary.

As you evaluate the goals you have in place for 2020, as you think through the energy of the year’s number of 4 and the Emperor, keep these themes of empowerment, progress, and stability in mind. This year makes so much space for growth and expansion, for ambition and movement and power, but you have to take that control and do something with it. Let 2020 be the year you grab the reins and make deep, lasting progress towards those big goals, moving with intention and purpose. The dreams you hold are so important, and by making concrete plans to execute them properly, you give them the respect and honor they deserve.

How has 2020 been for you so far? What progress have you made towards your intentions for this year? How do you see the energy of the Emperor helping you to build a foundation for success? 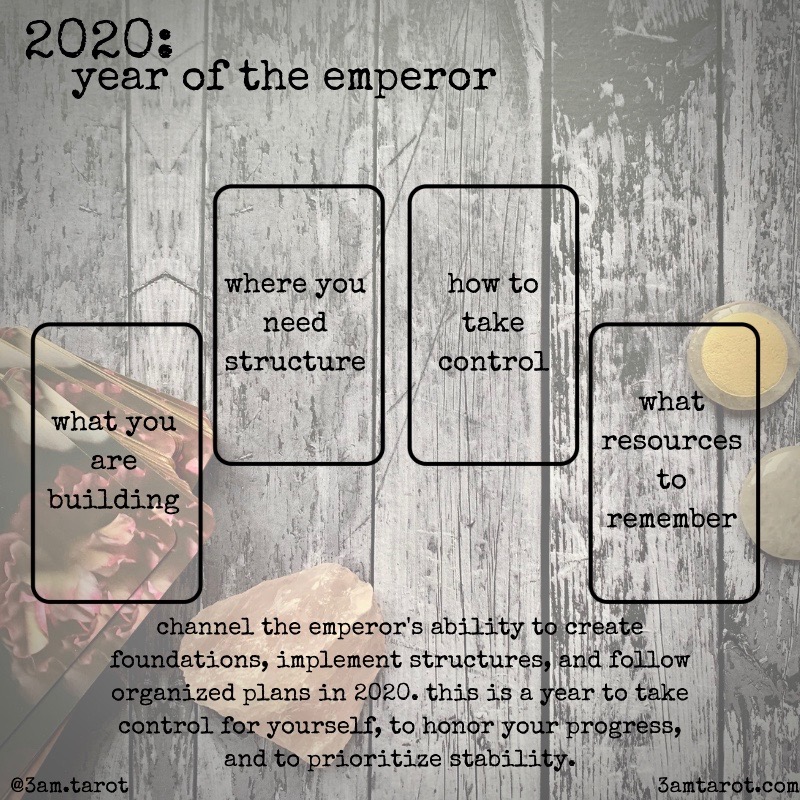 30 october horoscope2020 Is the Year of the Emperor; Are You Ready to Combine Structure and Growth?